He first graced our screens in the seminal teen drama, Skins, before going on to make his movie debut in Danny Boyle’s Slumdog Millionaire, which picked up eight Oscars, including Best Picture.

He’s gone on to star in many more critically acclaimed films, including The Best Exotic Marigold Hotel, and Lion, for which he won a BAFTA, and received Oscar and Golden Globe nominations.

Now, he’s taken the lead role in Armando Ianucci’s adaptation of The Personal History of David Copperfield, which is already a critic’s favourite.

Like in Season One, this episode I’ve called a “short haul” episode, because I didn’t have quite as much interview time as I normally do. The way that it tends to work with movie stars is you meet up in a hotel – in this case it was the Soho Hotel in London, which is a real celeb haunt – and you’re given quite a tight time slot before the next interviewer comes in. If you’ve seen Notting Hill, it’s like when Hugh Grant interviews Julia Roberts for Horse & Hound!

Despite literally just getting off a flight from LA, Dev was as warm and down to earth as he seems on screen, and having shot movies and travelled all around the world in some fascinating locations, I really hope you’ll enjoy hearing his travel diaries.

Dev’s new movie, The Personal History of David Copperfield is out now. 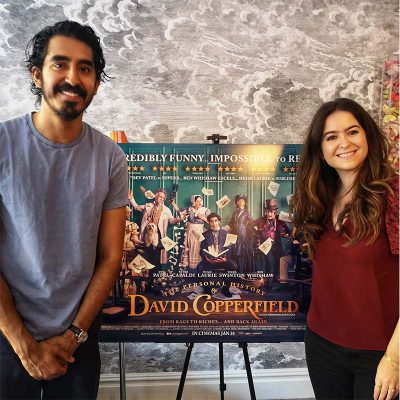