Today, we’re heading to a mountainous island nation in the Pacific Ocean, with two main islands, the North and the South. A land of mammoth national parks, epic biodiversity, dynamic Māori culture and world-class adventure sports. One of the most popular destinations to be picked by my guests as top of their travel bucket list. It is of course, New Zealand.

Today’s episode is a bumper celeb guest double bill, representing both the North and the South island, kicking off with the comedian, writer and actor Rose Matafeo, who grew up in Auckland on the North Island. Rose’s critically acclaimed show Horndog won the award for Best Show at The Edinburgh Fringe Festival, setting her on a trajectory to international stardom. Her sitcom, Starstruck, which she writes and stars in was commissioned by the BBC and HBO Max. Season One became the BBC’s best performing new comedy of last year. Rose is particularly passionate about NZ’s food and cultural scenes, and she shares her must dos, her must eats, and all her insider North Island knowledge, from its magnificent coasts and beaches, to geothermal wonders, sprawling farmlands and Maori rich culture.

And then we head to the South Island, where we are joined by arguably the greatest rugby player of all time, Richie McCaw. Richie captained the New Zealand All Blacks for 15 years in the 00s and 10s to two world cup wins. He achieved an astonishing 148 caps, a record only just beaten and was named World player of the year 3 times. From wildlife to wineries, glacial valleys to star-filled skies, its no wonder the other-worldly mountainous South Island was the destination where the Lord of the Rings films were set. It’s been Richie’s home all of his life, and he shares his expert knowledge on the island he knows so well.

If you’re ready to find out more about planning your trip to NZ, head to newzealand.com and check out your favourite travel magazines and newspaper travel sections, which have plenty of handy guides.

And to hear future episodes as soon as they’re released don’t forget to hit subscribe or “follow” on your podcast app of choice.

If you can’t wait until then, there’s always the first six seasons to catch up on, with guests from Sir Michael Palin and Jo Malone, to Sir Ranulph Fiennes and Raymond Blanc. 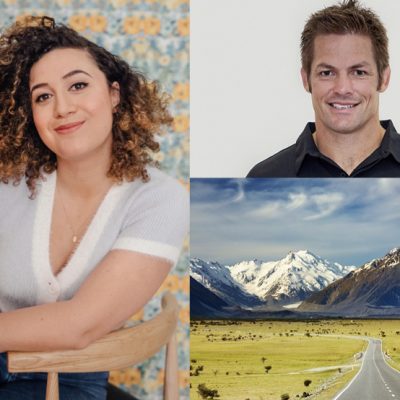